The main building of the Pökkölä farm located by Lake Keitele was built for the owner of Metsäkymppi and his family in the early 20th century, when Finland’s forest industry was booming. No road led to the farm, and people had to use wooded footpaths and waterways to move around the area. As was the custom, trees felled in the forest were pulled to the shores of Pökkölä by horses and rolled into the lake for log floating while the lake was unfrozen. A proper road to the area was not built until the 1960s.

The people living in the outhouse kept cows, swine, sheep and chickens. Small cultivated patches, now covered by the forest, provided feed for these animals. The people grew hay, oats and even barley as well as potatoes and vegetables. The family let out the upstairs of their house to a migrant family and offered accommodation for forest worker trainees and substitute teachers from the nearby school.

In the 1950s, boating became a popular activity at Lake Keitele and many campers discovered its islands. There was a popular dance pavilion in the cape of Kovala opposite of Pökkölä. The tradition was to burn a Midsummer bonfire first on the shore of Pökkölä and then in Kovala at midnight.

Over time, the Pökkölä farm was deserted and left to the mill. Then, the recreational committee of the Äänekoski branch of the Paperworkers’ Union took an interest in the area. In 1977, the mill let nearly ten hectares’ worth of land out to the Äänekoski branch at a reasonable price. The branch established a holiday resort for its members in Pökkölä. Many parties, camps and events were held at Pökkölä over the years.

In the 2000s, the interest in the resort and its maintenance tanked and the entire Pökkölä farm was put up for sale. This is where two paths became one: Antti + Pökkölä = Vonkale

Antti is the youngest fisherman son of a fisherman father. He has loved fishing since the day he was taken fishing as a baby at the family’s summer cottage in Suonenjoki. Time went by and the small fisher boy grew into a fisher teen and, finally, a fisherman. This fisherman met the love of his life in Suolahti, Äänekoski, where he moved to later on. Then, a small fisherman’s daughter was born and the family decided to hold her christening at Pökkölä.

After the ceremony, all the guests admired the idyllic place, in particular the beautiful nature. Antti’s parents, who were also present, had been dreaming about moving to the countryside by a lake. One of the parents joked that they could move to Pökkölä. Antti said: “Well actually, the place is up for sale.” This gave the spark for a game of make-believe that escalated into a “megalomaniac dream” that nobody really believed in at the time. But true it became.

Antti quit his engineering studies and took the first step towards fulfilling his dream by becoming a qualified fishing guide in 2016.  His family renovated the old main building of Pökkölä and moved there. Antti’s retired parents also moved to the farm to help around.

That spring, Antti began living the life of a happy but busy entrepreneur and farm owner. Four cottages were renovated and modernised and a fifth cottage was built. Year after year and hectare after hectare clearance and cleaning parties were organised. A nature trail was laid down by covering forest footpaths with wood chips. The trail became longer and longer every year. First, a lean-to was built by the trail, which was also a great way to practice working with timber. Later, a large Sami hut was built in the forest. The hut is perfect for spending idyllic evenings with friends and family. 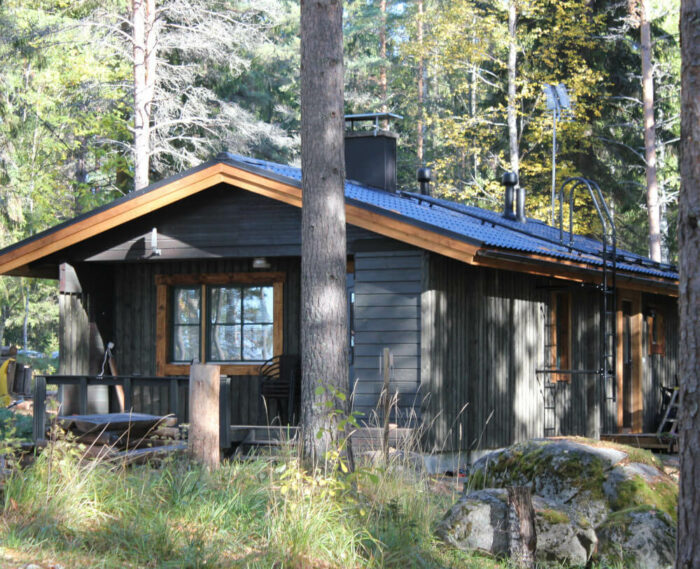 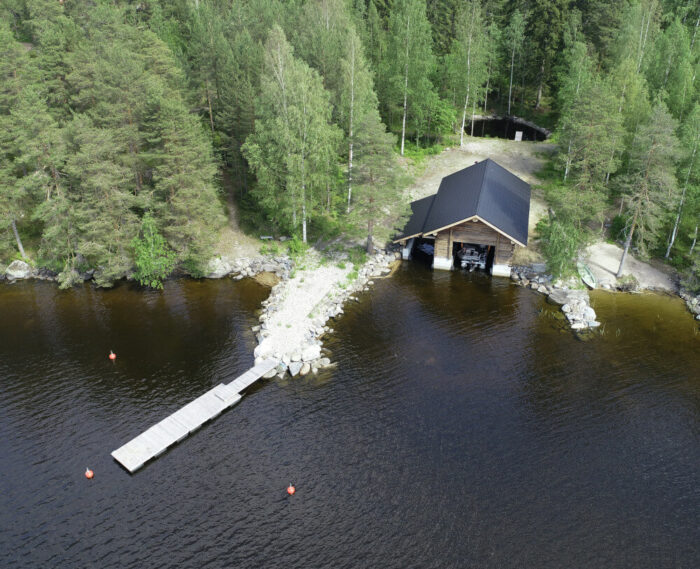 The greatest effort was put into building a massive boathouse of timber for a 12-person fishing vessel and a smaller fishing boat. A local timber craftsman carved the huge logs brought from Kiihtelysvaara and the staff of Vonkale worked as helping hands. The crown of the building, the ridgepole, was made of an elderly pine felled behind the sauna.

From the very beginning of Vonkale, Antti wanted fishing, his job and hobby, to be present in everyday life. The almost 300-metre-long shoreline offers wonderful conditions for fishing. Everyone can find their own fishing spot on the shore. There is also a fish cleaning hut near the shore, where you can clean your catch without being bothered by mosquitoes. Guts and other leftovers are disposed of ecologically in a compost bin. The worm compost is very handy for those looking for fish baits. Every cottage comes with a fishing rod, and all guests can use Vonkale’s rowing boat and life jackets. The cottages’ interior design follows the fishing theme of the resort with decorative wobblers and fish.

Vonkale has also been developing new services, such as fishing-themed camp schools and full-service kayak trips, for upcoming seasons. This year (2021), Vonkale is organising its own fishing competition for the first time. Vonkale Predator Trophy strives to spread the joy of fishing.